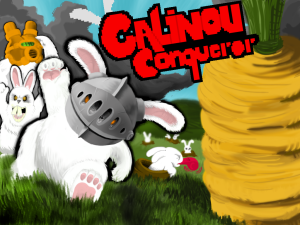 Pluzzle-game developed for the “Game à Niaque” contest (Epitech/TGS) in 2011 with other students from ENJMIN.

The goal of the game is to fill grids with rabbits so they can conquer the world. Place a female rabbit on a male rabbit (or the other way around) to spawn a lair, which would spawn rabbits all around it the next turn. There is several obstacles on this grid that you must compose with. Thankfully, several items can help you achieve this. Senior technical audio designer working on computer games at Redhill Games (previously at Remedy Games). I also work on my own silly indie projects and I teach at ENJMIN, the graduate school of computer games in France.